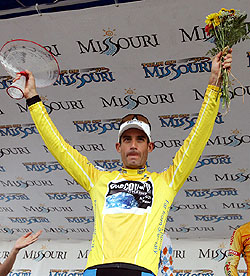 623 miles of rolling fun, featuring the world’s greatest cyclists will be highlighted next week (Sept 8-14), as the second Tour of Missouri bicycle race gets started in St. Joe.  Lt. Governor Peter Kinder hopes to build on last year’s successful race.

Kinder said the reason he thinks this was such a successful race last year was that this world class event not only went through the big metropolitan cities of Kansas City and St. Louis, but it hit the smaller rural communities such as Clinton, Lebanon, and Hermann.

This year, the race will go through four new towns and if you are not close enough to get to one of the host cities or watch along the race route, you can follow all of the action on the official website, www.tourofmissouri.com .

Not only does the race allow for Missouri to promote its great landscape and cities, but with the web access allowed visitors from all over the world to learn more about the state, plus Kinder estimates it had an economic impact of $26.2 million for host cities.

Hear more from Lt. Governor Kinder on next week’s race.

Download/listen to Tour of Missouri (mp3)