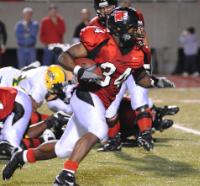 The Central Missouri Mules gave the Arkansas Tech Wonder Boys a heavy dose of senior running back Glenn Milner on Thursday night as he tied a school record with five touchdowns and led UCM to a 49-13 win to close out the non-conference slate.  (Glenn Milner photo courtesy of davekopp.net )

The Central Missouri offense was as balanced as could be with 249 yards rushing and 249 yards through the air.   Milner’s five touchdowns tie him with Will Caldwell (2005 vs. Pittsburg State) and Elliott Eley (1988 vs. Northwest Missouri State) in the UCM record books.