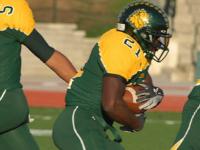 Freshman quarterback Colin Howard and junior running back Toderick Hunt rushed for three touchdowns each as the Missouri Southern Lions racked up 404 yards on the ground with eight rushing scores, defeating visiting Haskell, 66-9 in Joplin.

Southern (2-0) tied a school record with eight rushing touchdowns in the game, matching the previous mark set in 1982 against Evangel. The Lions were also two points from tying the school record for points in a game (1982, Evangel).