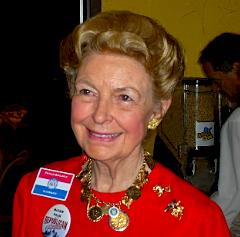 Missouri Republicans who traveled to Saint Paul, Minnesota for the party’s national convention are leaving or have left the Twin Cities and are headed home to the Show-Me State – energized!

Conservative icon Phyllis Schlafly of St. Louis, an alternate delegate to the convention, believes Alaska Governor and now GOP vice presidential candidate Sarah Palin has brought a new force of energy to the Republican Party, which – only a few weeks ago – appeared to some political experts to be headed for disaster in November.

Schlafly says conservatives throughout the country like what they see in Palin, and even the news of the pregnancy of Palin’s unmarried daughter, Bristol, hasn’t hurt. Schlafly says part of the reason for that is that Bristol Palin chose life for her unborn child.

Schlafly doubts Democrats will spend a lot of time attacking Palin … because, in Schlafly’s view, that might backfire.