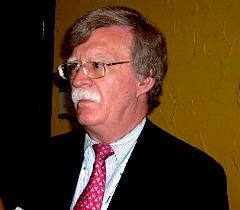 Missouri delegates to the Republican National Convention have left or are leaving the Twin Cities of Minnesota, having taken part in four days of conventioneering at the site of the convention in Saint Paul, and hearing from numerous speakers throughout the area.

Among the speakers addressing the Missourians was former U.S. Ambassador to the United Nations John Bolton, who puts national security issues at the top of his list of important issues that must be considered by voters in November. Bolton believes John McCain, with his experience in foreign policy, is best suited to lead the country. Bolton says the remaining time between now and November provide an opportunity for McCain and Democrat Barack Obama to discuss the threats and challenges faced by America. Bolton says there is a large gap between the two candidates’ views.

Bolton was never approved by the Senate because Democrats filibustered and refused to allow an up or down vote on the nomination. He says that could be a problem in a McCain Administration, but believes the Senate would be much more willing to allow a new President to put his team in place.

Previous Post: « Bears come up short in loss to Washburn
Next Post: State gears up for Tour of Missouri bike race »