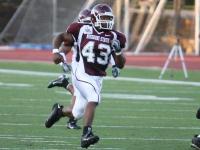 Missouri State fell behind 14-0 in its season opener Thursday night, but took the lead midway through the third quarter, only to fall inches short in the final seconds in a 35-27 loss to visiting Washburn.

On the Bears’ final play of the night, sophomore Cody Kirby completed a pass to senior Chris Geisz at the goal-line, but Washburn defender Casey Curran made a game-saving tackle. The ball was spotted inches short of the goal line, and the fourth-down and goal play ended Missouri State’s comeback hopes when Washburn took over on downs with 10 seconds to go.

Kirby finished with 261 passing yards, his second-best single-game output, with 21 completions on 42 attempts.