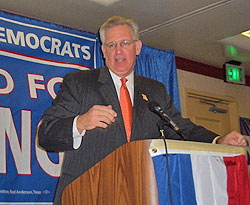 Attorney General Jay Nixon has burned his political bridges this time, running for higher office without a net beneath him.

Democrat Jay Nixon has twice run unsuccessfully for higher office. He lost in 1988 to Senator Danforth and 1998 to Senator Bond. In between, he won election as Attorney General. He is leaving the office after four terms, running for governor. Nixon says he feels his message is resonating this year, telling the Missourinet there is a synergy among Democrats and a synergy of message that will benefit him dramatically.

Nixon began his campaign for governor with a specific target:  incumbent Governor Matt Blunt. Blunt, though, dropped out of the race. After a Republican primary, Nixon finds himself favored against Republican Kenny Hulshof.

It’s a different role for Nixon, who couldn’t overcome his underdog status against Danforth and Bond. He says he’s learned a lot since then.

"I just feel really ready to lead right now," says Nixon, "and I think our best days are in front of us."

Asked about lessons learned in the losses, Nixon says simply, "All your life you learn".

Previous Post: « Danforth slams Left over criticism of Palin
Next Post: Infants can spend too much time on their backs »