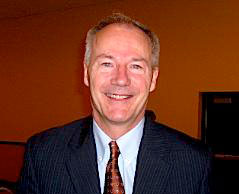 Missouri delegates to the Republican National Convention in Saint Paul, Minnesota hear from a politician from a neighboring state.

Former Arkansas Congressman Asa Hutchinson (R-AR), who also served as Director of the U.S. Drug Enforcement Agency, praises the McCain-Palin ticket, saying he sees a quality in John McCain that is shared by Missouri GOP gubernatorial candidate Kenny Hulshof – a willingness to reach out to Democrats to do what is right for the country.

Hutchinson told the Missourians that the McCain-Palin ticket is what Missouri voters are looking for because both John McCain and Sarah Palin embrace Missouri values, while – in is opinion – Barack Obama and Joe Biden do not.