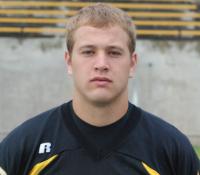 Drew Newhart a 6-foot-0, 200-pound redshirt sophomore from Cameron, Mo., was 19 of 22 for 304 yards and three touchdowns as the Griffons won 38-27 victory at Northern State on Thursday night.

He connected on his first six passes, and was 7-of-8 over Western’s first two possessions with both ending in touchdowns.

Two of his TD passes came in a 21-point third-quarter outburst, including an 86-yard hook-up with Cedric Houston to open the second half-scoring and break a 14-14 tie.

This is the second time in Newhart’s career that he has been named MIAA Offensive Player of the Week as he received this honor last season on October 22 for his performance against Emporia State.

Newhart, was the 2007 MIAA Freshman of the Year, is a graduate of Cameron High School.