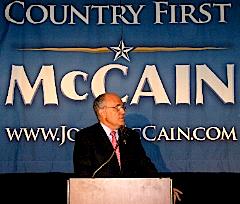 After a couple of slow days, the Missouri delegation to the Republican National Convention has had a chance to meet with some high powered speakers. First among them was former GOP presidential candidate and former New York City Mayor Rudy Giuliani.

The man known as “America’s Mayor” plans to campaign quite a bit in Missouri on behalf of John McCain, saying he knows the man well and respects him a great deal.

Giuliani says right now he’s looking forward to hearing John McCain’s nomination speech to delegates attending the convention and Americans watching on television. Giuliani says McCain has a tremendous story to tell and Giuliani hopes McCain talks about being held prisoner in Vietnam and saying NO to the opportunity to jump to the head of the line and leave prison early.

Giuliani praises McCain’s judgment, saying McCain’s support of the surge in Iraq is proof of that judgment. Giuliani speaks tonight … McCain gets his chance tomorrow.