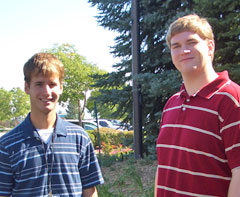 Two Missouri teen-agers, starting their college careers this year, already have had a great start to their education. The two have served as delegates to the Democratic National Convention in Denver.

Both were elected delegates as high school seniors. 18-year-old Rex Ryan graduated from Wellington High School and enrolled as a freshman at William Jewell College in Liberty today. Ryan says there’s a simple reason for his involvement with the Democratic Party so early. He says he wants to make politics his career and this is "an awesome time to start."

19-year-old Brett Carmical graduated from Brookfield High School and got special permission from Truman State University professors in Kirksville to skip his first week of school to attend the convention.

Carmical says it isn’t all that hard to get young people involved in politics.

"I lot of times, it just takes an introduction," he says.