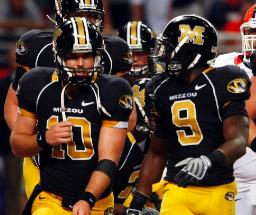 Missouri Tiger all purpose receiver Jeremy Maclin’s MRI showed no damage to backup the X-ray taken at the game on Saturday.  Maclin could be available for Saturday’s game with Southeast Missouri State.

Maclin, in his own words turned his ankle over has he was running a route in the fourth quarter of Missouri’s 52-42 win.  Maclin was carted off the field, but returned on crutches confident it was nothing serious.

Head coach Gary Pinkel said Maclin would have a precautionary MRI on Sunday, which found no damage.  It’s possible Maclin could be practicing as early as Tuesday.  He’s officially reported as an ankle sprain.

Also,  Maclin is one of four nominees for the AT&T All-America Player of the Week award after he had a  99-yard kickoff return and a 45-yard punt return.