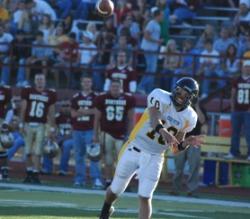 Missouri Western redshirt sophomore quarterback Drew Newhart led the Griffons to an opening season road victory at Northern State University, beating the Wolves 38-27.  Newhart passed for 304 yards on 19-of-22 and three touchdowns helping Western open its season with a victory for the fifth season in a row and improved its record to 7-3 against NSIC opponents.

The Griffons would strike first in the game as Drew Newhart would connect on a 48 yard scoring strike to Cedric Houston to make it 7-0 with 7:51 left in the first quarter. The Wolves would respond on a 13 yard pass from Eric Ellingson to Tavis Ve’e. The two teams would trade touchdowns the rest of the half a s they would be tied 14-14 going into the break.

The Griffons blew the game open in the third quarter as they scored 21 unanswered points off of three consecutive turnovers by the Wolves. Western would open up the scoring when Newhart connected for Houston for second time in the game for an 86 yard touchdown. The Griffons would then score on an 11 yard strike from Newhart to Mead at the 1:41 mark of the third quarter to make it 28-14 in favor of the Griffons. On the very next play safety Sylvester Gibson would snag his second interception on the night and scamper in from 25 yards out to make it 35-14 with 1:27 left in the quarter.

The Wolves would cut the lead to 11 with 1:19 left on an 23 yard pass from Ellingson to Mike Stamps, but it would not be enough as the Griffons would hold on for the victory.

Western did have ten penalties for 81 yards to the Wolves three for 36 but had 459 yards of total offense to the Wolves 387. Senior running back Zach Walker rushed for 112 yards on 19 carries and one touchdown in his debut in the black and gold.

On defense junior defensive end Bradley Davidson led the charge as he had 12 tackles with seven being solo. He also had 1.5 sacks and three tackles for a loss. Christian Sandoval had a nice opening day performance for the Griffons accumulating 10 tackles.