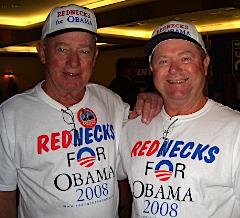 The hit of the Democratic National Convention this week hasn’t appeared on stage and it’s not even an official part of the proceedings. The hit of the convention is a pair of men from Rolla who have begun the grassroots effort, "Rednecks for Obama".

As Tony Viessman explains, the two plucked the name out of a page of Missouri political history, from a gubernatorial primary debate in which the candidate from St. Louis called the late Governor Mel Carnahan, "That redneck from Rolla".  Viessman says the good ole boys from Rolla took offense, but decided to turn an insult into something positive and "Rednecks for Obama" was born.

The two have conducted more interviews than they can remember; print, radio, and TV. They have been the subject of much blogging. The foreign press at the DNC seems fascinated by them, though Viessman says they usually aren’t familiar with the term redneck and the two have to explain it to them.

And, then, there are the doubters, the professional press skeptics. Les Spencer says they handle them as well, answering questions to prove they are, indeed, rednecks. All in all, he’s enjoyed all the attention, no matter what the reaction.

Spencer and Viessman had 300 bumper stickers and 50 T-shirts made at first. They’re gone. More are on the way. The two have actually met Barack Obama. During Obama’s swing through rural Missouri, they held up signs in Rolla and wore their "Rednecks for Obama" T-shirts. After Obama heard the explanation behind the group, he met with them at Union.