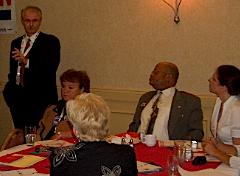 Voting is underway at the Democratic National Convention as delegates choose the party’s presidential nominee. It will be Barack Obama, but uncertain is how Hillary Clinton supporters choose to express themselves.

Missouri delegates have heard from the Missouri Whip for Hillary Clinton, Peggy Cochran of the Lake of the Ozarks, who says she made a very emotional decision when she decided to vote for Barack Obama. Members of the Missouri delegation for Clinton met shortly after the breakfast and discussed their options. Many of those pledged to Clinton urged fellow Clinton delegates to vote for Obama and close ranks in the party, stressing that unity will be necessary to defeat Republican John McCain in November.

Though Obama won the state’s presidential primary, the margin was so close the delegates split 36-36.

The chairman of the Clinton campaign in Missouri is Representative Rachel Storch of St. Louis. Storch says she will vote for Obama as the nominee and will vote for him in November and do everything in between to make sure he gets elected president.

The roll call vote comes tonight. It is not known yet what form it will take.

Biden gets a ringing endorsement from West-Central Missouri Congressman Ike Skelton who has been friends with Biden since the Delaware senator campaigned for him in 1976.