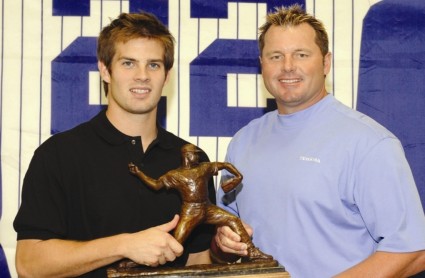 Crow was undefeated in 2008 with a 13-0 record and a 2.35 earned run average with the Missouri Tigers. Crow struck out 127 batters in 107.1 innings, leading Missouri to the NCAA Regionals. In addition to winning the Roger Clemens Award, Crow was the Big 12 pitcher of the year and a finalist for the Golden Spikes Award.

The finalists for the 2008 Roger Clemens Award were Joshua Fields of Georgia, Chris Hernandez of Miami (Fla.) and Brian Matusz of San Diego. Prior winners of the award include David Price of Vanderbilt (2007), Andrew Miller of North Carolina (2006), and current Kansas City Royal Luke Hochevar of Tennessee (2005) and Jered Weaver of Long Beach State (2004).