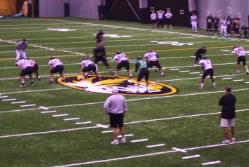 Missouri football head coach Gary Pinkel said today’s scrimmage gave the second team a chance to get a lot of snaps and the team was able to work on special teams as the Tigers wrap up their three week training camp.

Pinkel was pretty happy with the way things went today and continued to praise the freshmen class that is coming in this fall.  While he wouldn’t point out playersindividually, he said he’s been pleased with their play, but wouldn’t elaborate on who may or may not be redshirted.

Pinkel added that he’s pretty happy with the offensive line and said that unit saw a little more action today in the scrimmage, much like last year’s defense did.  The offensive line is the most inexperienced part of this team after losing two of their top lineman.

Freshmen quarterback Blaine Gabbert took the majority of snaps with Chase Daniel sitting out and Chase Patton nursing a slight hamstring pull.  Gabbert at times looked like a freshmen.  In the span of seven snaps, Gabbert was intercepted, fumbled a snap and pitched the ball into the hands of a defender while running an option play.

However, Pinkel said it was good that Gabbert got "dirty."  In other words, it’s good to see how a young quarterback reacts to situations that come up when there are different skilled players on the field.  He said there is nothing wrong with seeing a little adversity.

The team takes Friday off, then has an intense practice on Saturday before beginning their typical pre-game weekly practice schedule ahead of the season opener on August 30th in St. Louis against Illinois.