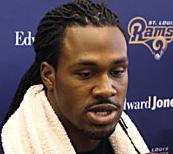 Rams running back Stephen Jackson ended his holdout and arrived and practiced today with the team after restructuring his contract.  It is unlikely Jackson will play this Saturday.

His contract is for six years worth $44 million and a guarantee of $20 million.  Head coach Scott Linehan said he’s happy to get Jackson in camp, but as far as Saturday’s game, "No, I’d say that’s a real long shot. Considering he has not had his shoulder pads on yet, since the last game of the year. There’s a good chance he’s going to get a lot of extra work though in the next upcoming days that’s for sure."

The Rams said all along they would not negotiate until Jackson gets in camp, who has missed two games and 27 days of practice.  Jackson is glad to have the whole ordeal over with.

"Everybody keeps talking about relief, I’m very happy that it’s over and that we can put this behind us a few days from now. The whole focus is going to be on what happens in the game Saturday night and getting ready for Kansas City on Thursday and as you do all of this, getting ready for Philly in the opener. We don’t have to have that part hanging out there or looming out there. It gives us more time than if it had gone another three, four days because there’s a lot of stuff we can get done with Steven leading up till then. He will get plenty of extra work and we’ve got a plan for that. I’m very happy it happened now and it wasn’t any later."

Previous Post: « Chiefs LB and OL banged up
Next Post: McCain to visit Missouri on eve of GOP National Convention »