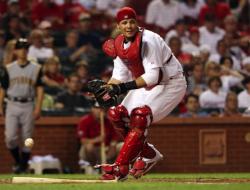 The Pirates scored a run in the first inning off Looper on a double by catcher Ryan Doumit.  Looper allowed just three hits and two strikeouts as he again becomes a tough luck loser with not a lot of run support.  Without a doubt, Looper has been the most consistent Cardinal pitcher.

Two errors led to three runs in the ninth for Pittsburgh after they loaded the bases off Kyle McClellan.  Andy LaRoche hit a ground ball and the Cardinals came home for a force out, but Yadier Molina dropped the ball trying to get a double play.  Then Luis Rivas flied to center, but Joe Mather’s throw missed the cut off man and Molina and that allowed another run to score.

The Cardinals tried to rally.  Adam Kennedy fought off pitches to bloop a hit into left field to drive in the Cardinals only run.  The bases were loaded, but Brian Barton struck out.  The Cardinals stay 2.5 games behind Milwaukee for the Wild Card.