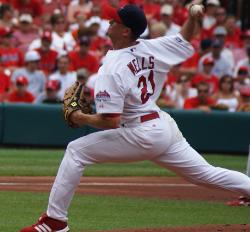 The Royals reached an agreement in principle free-agent pitcher Kip Wells.  He was released by Colorado after going 1-2 with a 5.27 ERA in 15 appearances.  He could join the team as early as tonight in Cleveland.

The Royals will pay him the pro-rated league minimum of $90,000, plus he’s getting $3.1 million from Colorado.   Cardinal fans will remember him from last year when he went 7-17 as a starter.

It’s hard to believe the Rockies would have taken a chance on Wells and spent that much money on a guy who hasn’t had an ERA under 5.00 since 2004.  It’s a relatively cheap move for the Royals who will add an extra arm to their bullpen for the final month of the season.