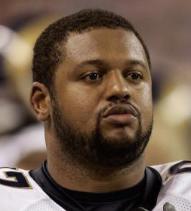 The Rams filed a grievance with the NFL looking for $201,250 of suspended player Claude Wroten’s signing bonus after the defensive tackle was suspended for one year for violating the NFL’s substance abuse policy.

Wroten got an signing bonus of just over $805,000 when he was drafted in the third round of 2006 and signed to a four year deal.  The Rams want some of that back since he’s not playing this year.

The hearing which will be handed over to an arbitrator can take up to a year in most cases.  Wroten was suspended right before Rams’ training camp opened in April.