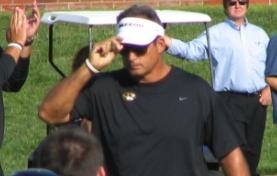 So much has been made about the 17 returning starters for the Missouri Tiger football team, but head coach Gary Pinkel said after practice yesterday that as many as eight true freshmen could play this season.

Talk about depth on this team.  If it is true that in fact, eight true freshmen would see playing time this year, it would be the most of any Tiger team in the Gary Pinkel era.  The players that Pinkel talked about were tight ends Andrew Jones from Smithton and Michael Egnew who had three catches for 30 yards in Saturday’s scrimmage, offensive lineman Dan Hoch who was rated one of the top linemen in Iowa, receiver Jerrell Jackson and Gahn McGaffie, linebacker Will Ebner, defensive end Jacquies Smith, and long snapper Beau Brinkley.

Pinkel said this list is not etched in stone and it could change.  Nothing was said about freshman quarterback Blaine Gabbert, but he did take snaps with the number one unit against the number one defense and threw a 15 yard touchdown pass to Tommy Saunders and showed nice touch on a pass to Jeremy Maclin.