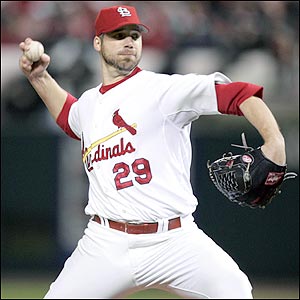 Chris Carpenter will play catch this afternoon in the outfield at Busch Stadium prior to tonight’s game against Pittsburgh.  How he feels afterwards will help determine how the Cardinals will set up their pitching staff for the stretch run.

Carpenter pulled himself out of a game in Chicago on August 10th.  The team said it was nothing more than a shoulder muscle strain and if Carpenter is able to play an aggressive game of catch, the Cardinals will plan on Carp returning to the starting rotation.  That will allow the Cardinals to activate Adam Wainwright and put him in the bullpen.  If he has a set back or feels some pain, the Cardinals will most likely have Wainwright continue to condition in the minor leagues with at least another rehab start, then move him to the starting rotation.

For now, the Cardinals have the benefit of four days off around seven games, so they will only need four starting pitchers, so they wouldn’t need Carpenter or Wainwright until the Arizona series at the beginning of September.