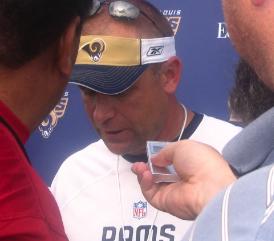 As far as Setterstrom, he will have surgery later this week.  Gorin, suffered a shoulder injury very similar to what Orlando Pace suffered last year.  Head coach Scott Linehan met with the media on Sunday a day after the Rams 7-6 win over San Diego and discussed his team’s health.

"You know obviously (G) Mark Setterstrom, the diagnosis was a fractured Patella, that is what we thought last night and that is what it is. He will have surgery sometime in this week and you know obviously that puts him out for the year. The other one that has come up within the last twenty-four hours was (T) Brandon Gorin’s shoulder injury is a little more severe than originally diagnosed. It was not misdiagnosis they were continuing to study the MRI and those things and he has a pretty significant shoulder injury. It is real similar to what (T) Orlando (Pace) had so it is an injury that will force him out for the year. Those will be our two guys at some point that will be put on injured reserve. A couple of the other injuries from yesterday, (RB) Brian Leonard, he did have a shoulder sprain, it is not serious but he will be pretty "Iffy" for this week’s game and (LB) David Vobora does have a pretty severely sprained ankle and that will certainly put him of for this next game and the one after that. But that is pretty much if. You know there were a couple others (QB) Marc (Bulger) had strained his shoulder but he is ok. (LB) Tim McGarigle had hurt his toe but his is alright. We had some other guy that had some things that forced him out for a couple plays but got back in there. So general middle of the preseason type things right now."