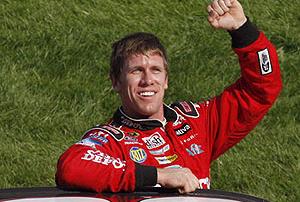 After winning the Nationwide Series race on Saturday, Columbia native Carl Edwards completed the weekend sweep by winning the 400 mile race Sunday at Michigan International Speedway to pick up 10 bonus points in the Sprint Cup standings.

Edwards held off Spring Cup leader Kyle Busch on a restart with two laps to go to hold on for the victory.  Busch is so tough on restarts.  For Edwards it was his fifth Sprint Cup win of the year and 12th of his career.

Edwards has 17 top 10 finishes in 23 starts this year, the most of any driver and he sits in second place, 222 points behind Busch in the Cup standings with three races left before the Cup Chase.

Edwards discusses his win and gives much credit to his crew which he says has really stepped up it’s game.