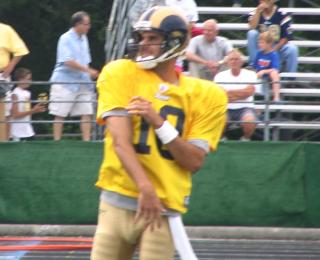 Rams’ head coach Scott Linehan is not concerned with the injury to starting quarterback Marc Bulger or his inconsistent play in two preseason games as Bulger continues to get hammered under center.

In the first games this preseason, Bulger is just 10 of 23 with no touchdown passes and three interceptions, but Linehan doesn’t sound too overly concerned.  Yesterday he said, "Marc is making a lot of progress you know it is a new system, got some new players and all those things. As soon as we get our timing down, he is going to continue to play winning football for us. Right now we have been off on a couple plays; he has had two tipped interceptions, and that kind of thing. This is a precision game and offensive timing has to be right on. We have just been off a couple clicks so I have no concerns at all. It will start coming around. I think as you see the development of the attitude of our team and our ability to run and protect up front and do all those kinds of things there are a lot of positives that you can draw from what is going to be a really good offense at the end of the day. But right now we are not playing as well from a statistical stand point and an execution stand point as we plan on playing here hopefully this week and the week after leading up to our opener."

As far as his injury, Bulger suffered a shoulder strain and he will not see doctors.  They tested him after the game and his strength in the shoulder was fine, but Linehan admitted the shoulder was sore enough at the time of the game to bring Bulger out and bring Trent Green in.