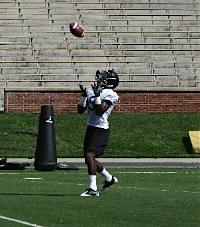 It is the time of year that middle school football players find out what it takes, high school players dread, and collegiate athletes relish.

The Tiger’s returned to Farout Field yesterday morning for a long workout, only to turn around a few hours later and do it again in the afternoon.

The morning showed numerous shake-ups in the depth chart, as head coach Gary Pinkel and the rest of the staff still tries to figure out what the starting and second teams will look like before the first game in St. Louis against Illinois.  Senior Kurtis Gregory seems to be back at the guard spot, where he saw all of his playing time in 14 games last season, while Freshman Elvis Fisher moved into the number one spot at left tackle.

“We’re going to put our best players at the best spots, and that’s the way they are right now.” Pinkel says.

Freshman quarterback Blaine Gabbert moved ahead of redshirt freshman Jimmy Costello to play with the third team offense in the morning.  Gabbert’s afternoon, however, was different as he was watching the majority of the action in a red jersey with an injury to his right shoulder, the same one that troubled him in high school.  He had an MRI yesterday, no reports have been given on the results.

In related injury news, Danario Alexander spent much of the day on the elliptical machine, however, he was running some sprints on the sidelines in the morning after being cleared to run full speed.   Van Alexander was putting on and taking off his red jersey all day, looking close to being ready to go after tearing his ACL in spring practices.  The Columbia native has been plagued with injuries throughout his Tiger career, but could be ready to play by the start of the season.

It is hard not to over-report on both quarterback Chase Daniel and wide receiver Jeremy Maclin, but the two look more comfortable than ever together, providing one of the day’s biggest highlights during one-on-one drills.  Maclin faked to the outside then streaked through the back of the end zone, where Daniel found him and zipped a pass to connect for a wide open touchdown.