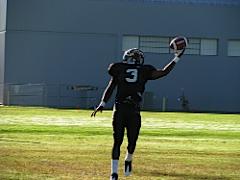 During Mizzou’s first fall practice in full pads, backup quarterbacks were able to step up big in the absence of starter Chase Daniel, who was attending a funeral.

Daniel was replaced by senior Chase Patton on the first team offense, which left freshman Blaine Gabbert to swing between the second and third team offenses.

During one on one drills, senior Chase Patton connected with junior Jared Perry, who had slipped past the Tigers’ corner and into the end zone on a fly route up the sideline.

Perry continued to impress the rest of day, ending on a high note when he caught a bullet in the back of the end zone during full team scrimmage situations.

Not to be overshadowed by the offense, junior linebacker Sean Witherspoon, who was excited about being able to play full contact for the first time this season, made his name known throughout practice.

“Oh yeah, you always look forward to this day. Last night I kind of couldn’t go to sleep a little bit, I had the jitters and everything.  But it’s defiantly fun to get out here and knock some guys around,” Witherspoon says.

The Tigers will begin two-a-days tomorrow morning at 7:15 AM.

You can view more pictures on our Flikr page