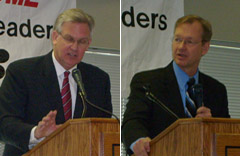 For the first time since Tuesday’s primary elections, the Republican and Democratic candidates for Governor have attended the same forum.

And, while they didn’t meet or address each other at the Missouri Farm Bureau Grassroots Conference, they each had plenty of time to address those attending the gathering.  GOP flag-bearer Kenny Hulshof reiterated his support for ethanol and other alternative fuels, saying crop growers and livestock producers both benefit from expanded use of alternative fuels and should not see each other as opponents.

Democrat Jay Nixon supports ethanol and other interests that benefit agriculture.  In fact, he wants greater resources focuses on the Department of Agriculture.

Hulshof also spoke of his record in Congress and his adherence to ethical standards, pointing out that – as a member of the U.S. House Ethics Committee – he targeted then House Republican Whip Tom DeLay and was promptly removed – by Republican Leadership – from the Committee.

Nixon touted his record as a supporter of such things as health care for those in need. He says, as Governor, he will work to restore Medicaid cuts.

The Farm Bureau later announced its endorsement of Hulshof in the Governor’s race.