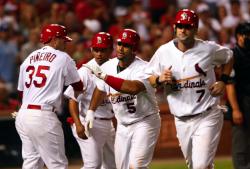 Albert Pujols hit a grand slam and Ryan Ludwick hit his 29 th home run with both blasts coming in a five run fourth inning as the Cardinals take the second game of this series with the Dodgers winning 9-6.

Pujols finished the night 4 for 4 and is now hitting .352 on the year.  While Pujols may not lead the team in home runs and RBIs, he’s still exciting to watch.  He’s just an amazing player.  For a guy with 23 home runs and 73 RBI and to still be able to hit for average is just amazing.

If I had to pick one player who I thought could make a run at baseball’s Triple Crown, there is no other name I can think of besides Pujols.   His teammate Ludwick isn’t too shabby himself.  Hitting behind Pujols, Ludwick is batting .307 and his 29 homers and 82 RBI leads the team.

Joel Pineiro saved the bullpen going seven innings, allowing four runs, but the Dodgers made it interesting as they got two more off of Brad Thompson.  Manager Tony LaRussa turned the game over the Chris Perez who pitched the final 1.2 innings to pick up his first save.

With Jason Isringhausen clearly not in the right frame of mind or physically able to close games and the inconsistent pitching of Ryan Franklin, this is an opportunity for Chris Perez to win over the closers role, a job he had at AAA Memphis.

If Perez could step up and become a reliable closer, that could be the missing piece that could push the Cardinals past Milwaukee for the Wild Card