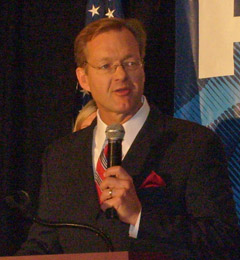 The Republican gubernatorial race that began with Governor Matt Blunt’s surprise announcement that he would not seek a second term has been won by Congressman Kenny Hulshof (R-MO), who now goes up against Democrat Attorney General Jay Nixon in November.

After a heated campaign against Treasurer Sarah Steelman (R-MO) Hulshof came away with a victory, capturing just under 50 percent of the votes cast in Tuesday’s GOP primary, compared to a tad less than 45 percent for Steelman. Two minor candidates took just over 6 percent of the vote.

In his victory speech, Hulshof congratulated his main GOP opponent, and thanking her for per public service. He pointed out that while this is a great victory, the next challenge is getting underway – the challenge to defeat Hulshof’s former boss in the Attorney General’s Office. Hulshof spoke of a number of areas in which he and Nixon disagree, getting a crowd of supporters to join him in chanting, "That’s the wrong way, Jay."

Hulshof says he will put forward a plan to lead Missourians forward, and hopes voters will embrace what he is calling his new direction, as opposed to what he says are Nixon’s old politics.