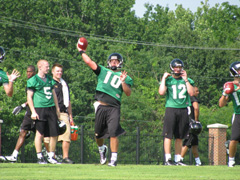 Head Coach Gary Pinkel is ready to start the season, even if the weather is not.  After the first practice kicked off in the 109 degree heat index Monday afternoon, the team was forced to alter a few of their drills. "Today the tempo wasn’t quite as quick as normal, we tried to be smart, read body language, give a lot of water, and talk a little bit more than what you normally talk, which I don’t like, but you have to do that."

While they were only practicing in helmets and shorts, Jeremy Maclin credited the strength and conditioning staff on a job well done getting them ready for the first day of heat, "It’s a little hotter, but I think we are well prepared for it."

In spite of the weather, Maclin is optimistic about both his own talent developed in the off season, and the talent level of the incoming freshman players. He is excited about the chance to help the fresh faces learn the system of Mizzou football.

Two of those most anticipated newcomers are freshman running back Drew Temple out of Rockhurst High School, and herald defensive end junior college transfer, Brian Coulter.  Coulter participated in a limited amount of drills due to an ankle injury earlier in the week.  Temple is rumored to be held up in the NCAA Clearinghouse and has yet to be seen at workouts or practices, however, Coach Pinkel expects him to be ready to go by early next week.