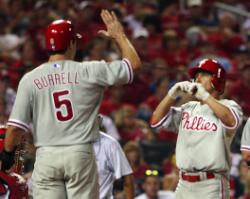 After Victorino’s two out homer gave the Phillies a cushion, the Cardinals tried to rally, scoring a run in the 8th to make it 5-3.  The Phillies then called on Brad Lidge who has been perfect in save situations this year, but got off the a bad start as Troy Glaus homered to lead off the 9th.

With one out, Lidge gave up back to back singles, then hit Cesar Izturis to load the bases with only out, but Lidge used the inexperience of Nick Stavinoha and Joe Mather to strike them out on nasty sliders to end the game and much like the way Albert Pujols silenced the crowd in Houston when he hit a bomb off Lidge in the ’05 playoffs, Lidge returned the favor for his 28th save.