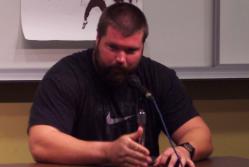 Christian Cantwell speaks matter of factly about his approach to his sport.  He says he doesn’t waste much time warming up and seems to do his best when things are chaotic.  Don’t mistake his laid back approach as indifference…he’s going to China to win a gold medal.

Cantwell, a former Mizzou track and field star and native of Eldon, is a U.S. olympic shot putter and is preparing to leave for China in a few days.  He is one of the best in his event that the U.S. has dominated, having won 47 of the 78 medals available in the Olympics.

He’ll be joined by stiff competition from fellow countrymen Reese Hoffa and Adam Nelson.  Cantwell’s best put of the year was 71 feet, 4 3/4 inches, which places him third in the world behind Nelson (72, 7) and Hoffa (72, 6 1/4).  Cantwell finished second in the USATF Olympic Team Trials.

Cantwell leaves on August 4th to help his body adjust to the time change.  He competes in the first day of the Olympics on August 15th.  The men’s shot put is the only sport where the qualifying and final rounds are held on the same day, so he’s not participating in the opening ceremonies.  As he says, standing four or five hours wears out a big guy.  He’s not sticking around for the closing ceremonies as he expects to be back in the states by August 20th.

He’s going to China for business.  He’s going for the gold medal.