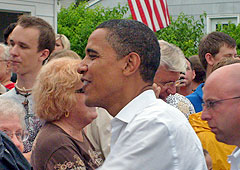 Accompanied on the trip by Senator Claire McCaskill (D-MO), Obama touched on themes that have become familiar parts of his campaign. Obama criticizes the Bush Administration for policies he claims are hurting middle class Americans. Obama pushes the idea that a vote for Republican presumptive nominee John McCain is a vote for a third term for President George W. Bush.

After round tables in Springfield and Rolla, the final event of the day was a barbecue in Union. Obama stepped away from this gathering of about 200 supporters to conduct an interview with the Missourinet, commenting on his decision to travel into parts of this state that are considered Republican areas.

Obama made it clear he wants to reach out to voters in all parts of the state – even on those parts that might not give him a lot of votes in November.

"I’m not gonna win every vote down here," Obama told the Missourinet, "But I think people here in Union – even Republicans here in Union – appreciate that you’re listening to them."

As for the overall strategy of targeting rural Missouri, Obama says, "I think a lot of times Democrats defeat themselves by just not showing up to places and not talking to people."

Obama makes it clear that all areas of Missouri – even the traditionally Republican areas – are being challenged in this election.