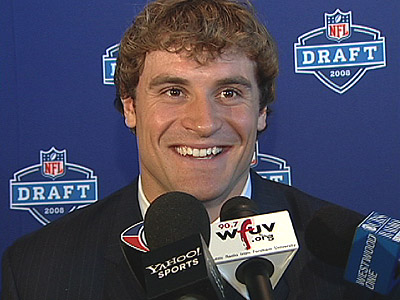 It didn’t take long for first round draft pick and second pick overall, defensive lineman Chris Long to get acclimated with the NFL and the rigors of training camp.  Just days into his first camp, Long is showing why he was the right choice.

It’s hard to believe that April seems so long ago, but there were we back in late March, early April debating whether or not the Rams should take Glenn Dorsey of LSU or Chris Long of Virginia.

Don’t get me wrong, the Chiefs did just fine grabbing Dorsey with the fifth pick overall, but the Rams scored big with Long in the number two spot.  I was on a talk show yesterday in Wisconsin talking about the Rams training camp and I was asked how Long will help the Rams.

As far as on the field.  He was raised the right way.  He’s got the inherit talent from his father Howie Long, the longtime Raider, but he also has learned the ropes from his media savvy father.  He’ll be able to handle the pressure of drawing comparisons to the position his father dominated.  When you listen to Long after the first few days of training camp, his approach is simple.

He knows he’s going to make mistakes.  He’s going to learn from those mistakes and while this is all new to him, it’s nothing that has overwhelmed him.

While he hasn’t played a down yet in the NFL, he speaks like a veteran knowing what needs to get done in camp.  When you put all of those intangibles in play with the fact that he fits in with this defense, this was a great move.

The Rams will have Long and Leonard Little on the ends, with La’Roi Glover inside along with last year’s number draft pick Adam Carriker who proved he could make the move from defensive end at Nebraska to defensive tackle in the NFL.

Listen to Long talk about his first few days in the NFL.