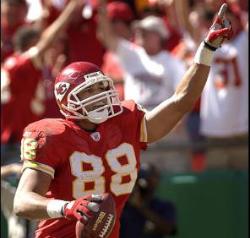 Nobody was more frustrated at the end of last year’s 4-12 season on the Chiefs than veteran tight end Tony Gonzalez.  Gonzo didn’t want to spend the last couple of years of his playing career on a team that was going through a rebuilding stage.  After the first few days of training camp, Gonzalez is changing his tune.

So good in fact, that while he’s not predicting a trip to the Super Bowl, he does go out on a limb to say this team will be much improved this year and by next year could be really good.

Gonzalez talks about playing out the last two years of his contract as if this will be the end of the road and his first goal is to go out and win a playoff game.  Something he hasn’t done since being the 13 th overall pick in 1997.

Gonzalez is ready to get to know Brodie Croyle a little better.  He’s ready to work with Croyle in camp so the two become a better pass-catch combination.  He’s also accepted the fact that he is now the veteran leader on this team and is making a conscious effort to get to know and mentor the younger players.

Listen to Tony’s comments, plus get head coach Herm Edwards’ insight on his tight end