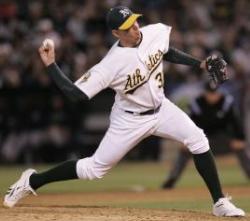 Brad Ziegler, an Odessa high school grad and a former pitcher with the Missouri State Bears now pitches for the Oakland A’s and is apart of the Major League record books for breaking a record that stood for 101 years.

He was called up to the big league team in May and made his debut on the 30th against Texas.  27 innings later, Brad would set the record for most consecutive scoreless innings pitched at the start of a major league career, when he pitched two innings of relief against Texas on Sunday July 27.  The previous record was 25 innings set in 1907.

Before a game with the Royals in Oakland, Brad talked about reaching the record, and how it never gave it much thought.  Plus, he tells me why he throws side arm.

Brad said he remembers watching the Royals winning the 1985 World Series while living in Odessa, and why he’s now a big fan of the Cardinals.  Plus, he takes us inside the A’s clubhouse to give us the secret on those bright white cleats they wear.

You’ll become a fan of his real quick.  Just a down to earth guy trying to do his best at the big league level.  By the way, the A’s come to Kansas City the first week of September if you want to catch him in action.