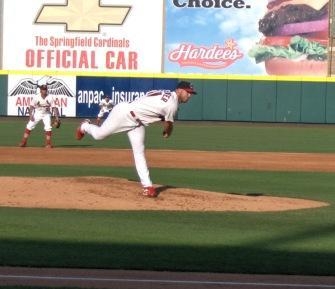 The St. Louis Cardinals and Atlanta Braves game on Wednesday could see a a familiar name penciled in to make his first start in a year and a half.  Chris Carpenter may be back after just two rehab starts.

After Mitchell Boggs had a rough outing in New York and with the ever progressing Chris Carpenter feeling better, it appears that Carpenter could make his first start of the year and make his first appearance since he was shut down last year and underwent Tommy John surgery.

Carpenter pitched on Friday and went 5.2 innings and gave up two runs in his second rehab start, this time with Memphis.  The St. Louis Cardinal’s website is saying "Carpenter probably won’t go much past 90 pitches, and his usually exceptional command may still be less than perfect. But he’s the man for the Redbirds, and his return is a very, very big deal."