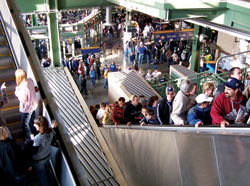 Cardinal fan Justin Larson of St. Louis is listed in critical condition at a New York City hospital after falling off an escalator during Sunday’s game at Shea Stadium.

New York police Sgt. Carlos Nieves told the St. Louis Post-Dispatch that "Several witnesses have told us they saw this individual sliding down the escalator handrail when he fell over the side, falling about 25 feet."

It’s reported that Larson has two broken ribs, a collapsed lung and swelling of the brain, but he is expected to make a recovery.  This isn’t the first time this has happened at Shea which is in it’s final year as the home of the Mets.

In fact, back in April, a New York man fell off an escalator to his death.