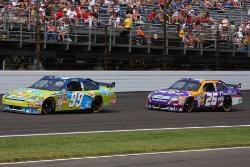 On a day when the caution flag came out a record 52 times, Carl Edwards of Columbia, and Jamie McMurray, a Joplin native had strong showings at this year’s Brickyard 400 at Indianapolis Speedway.

Edwards finished second behind Jimmie Johnson who won the race and McMurray finished in sixth although he was running up at the top as high as third.

There was a great article on NASCAR.com with David Caraviello said the tires used in this race could be compared to the Sugar Bowl not having a football or the floor at the Final Four championship being too slippery to play a basketball game.

Many of the drivers called it embarassing or apologized to fans who didn’t get to see real racing.  Edwards comments on the tire issue during his post-race press conference.