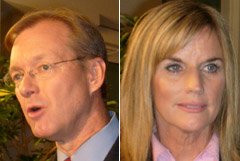 The two Republican candidates for Governor square off in their final debate prior to the August 5th primary election. Congressman Kenny Hulshof (R-MO) and State Treasurer Sarah Steelman (R-MO) went toe to toe in studios of KY3 television in Springfield in a debate sponsored by KY3, the Springfield News-Leader, KSMU, and Ozarks Public Television.

Many of the issues that had been addressed before were brought up during this debate – such issues as embryonic stem cell research and how both candidates are opposed to it. The debate also featured discussion of transportation issues with the candidates offering proposals for improving Missouri’s roads now and in the future.

While the sparring went back and forth, the biggest philosophical differences between the two Republicans – at least in this debate – seemed to center on the state’s ethanol mandate. Hulshof supports it saying it is good for Missouri farmers and helps keep the price of gasoline down. Steelman says the free market should decide whether ethanol is embraced, adding it is wrong for the government to force this mandate. Steelman also claims the mandate is contributing to higher food prices – a claim rejected by Hulshof.

Steelman and Hulshof now head into the homestretch as they prepare for the primary vote which is less than two weeks from now. The winner of the race will get little rest as he or she must then begin a new battle against Democratic gubernatorial candidate Jay Nixon (D-MO), Missouri’s Attorney General.