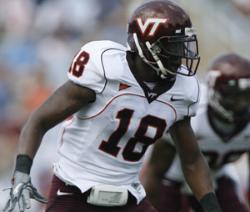 The Chiefs signed cornerback,  second round draft pick Brandon Flowers of Virginia Tech to a four year deal.  The Chiefs still need to sign first round picks Glenn Dorsey and Branden Albert signed before they start practices on Friday.

Flowers is projected to be a starter cornerback in what was an aging position last year.  As the team travels up north to Black River Falls, Wisconsin, the Chiefs have yet to sign Dorsey and Albert and it appears both will not be ready for the first practices on Friday.

The Chiefs thought they were close to Albert, but appear to be pretty far away from getting something settled with Dorsey.