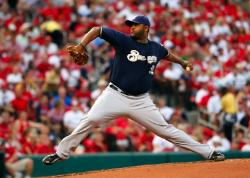 CC Sabathia threw his third complete game and moved to 4-0 since going to Milwaukee, as the Brewers beat the Cardinals 3-0 to take the first three games in this key division matchup.

Sabathia was stellar once again, needing just 106 pitches to shutout the Cardinals who have dropped three behind Chicago for the division lead and two behind Milwaukee for the wildcard.

Sabathia had a no-hitter that was broken up by Brendan Ryan with two outs in the 6 th inning.  Sabathia got Albert Pujols to fly to center leaving runners on first and second.  Sabathia allowed just three hits and two walks while striking out seven.

Cardinals’ starter Braden Looper did all he could in his five innings of work, giving up two runs including a home run to red hot J.J. Hardy.  Jason Insringhausen also gave up a solo home run in the 9 th to Ryan Braun who went 4 for 5.