For the second game in a row, Milwaukee’s Bill Hall homered to give the Brewers their second come from win against St. Louis’ bullpen to win 4-3, wasting a solid outing by Kyle Lohse.

Lohse started the game retiring 18 of the first 19 batters he faced, giving up a lone single to Prince Fielder.  The Cardinals jumped out to a 2-0 lead on former teammate Jeff Suppan thanks in part to a solo home run by Ryan Ludwick.  The Cards extended the lead to 3-0, but then Suppan settled down. 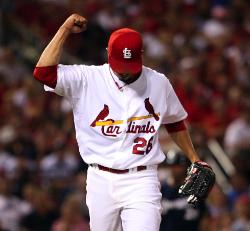 After Lohse gave up a lead off double in the 7 th , the Brewers manufactured a run.  LaRussa decided to stick with Lohse and not go to the bullpen, who coming into this game has been responsible for 21 of the team’s 44 losses, the most in the majors…the move backfired.

With two outs, Rickie Weeks doubled in Jason Kendall and J.J. Hardy singled in Weeks and the score was tied at three.

Then in the 9 th , with two outs, Hall took Kyle McClellan deep.  After the game LaRussa jumped on the media for trying to put blame on the bullpen for their now 22 nd loss.  He instead wanted to blame the lack of offense for not putting this game away.

He’s trying to protect his bullpen, but the bullpen blew it.  You can’t expect to score 9 and 11 runs every night like the Cards did against San Diego.  3-1 lead, you should be able to go to your bullpen to nail that win down and right now LaRussa knows he can’t.