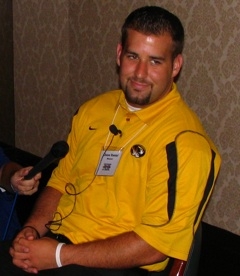 The Missouri Tigers showed up in downtown Kansas City wearing bright gold polo shirts and they stuck out amongst the red, maroon, and black shirts that the Nebraska, Texas A & M, and Texas Tech players wore.

The Tigers were easy to pick out.  Easy targets.  They better get used to it.  The media hammered QB Chase Daniel, WR Jeremy Maclin, TE Chase Coffman, and S William Moore with questions on returning to Kansas City in the December for the Big 12 Championship, competing for a National Championship.  The questions came as if it was already a foregone conclusion that Missouri would be the Big 12 Champs.   The Tigers weren’t biting.

Gary Pinkel tried to squash any talk of National Championships as he took the podium saying they’ve made "progress, but we haven’t arrived."  Pinkel always plays it close to the vest in terms of what the team’s long term goals are.  At this point his big concern is getting the players ready for that first game against Illinois.

Pinkel pointed out that while he thinks they’ll be O.K., there are still some questions on the offensive line with Adam Spieker leaving.  Pinkel compared this year’s offensive line to last year’s defense as a work in progress that will have to develop as the year goes on.

Quarterback Chase Daniel flew in from California where he is taking part in the Elite 11 QB Camp, where he and ten other college quarterbacks help high schools develop.  When he was asked who he thought the best quarterback in the Big 12 was, he laughed and said he was.  He wasn’t being arrogant, but he questioned "what else am I suppose to say?"

All of the coaches talked about the spread offense which is highlighted by Mizzou and Texas Tech and they all said that height is not a factor for Big 12 quarterbacks.  Daniel said he loves playing seven yards behind the line of scrimmage because it allows him to see over the line and his o-line opens up big passing lanes.

I’ve grown tired of reporters who compare Daniel with "prototypical" quarterbacks.  I’m not sure what that means?  Isn’t Daniel the prototypical quarterback for the spread offense?  He’s been running this since he’s been in 9 th grade.

Jeremy Maclin, while taking a back seat to Daniel sat confidently on his perch and said that he has gotten better in every aspect of his game and he says it’s needed.  If this team wants to get over that hump and win the Big 12 Championship, Maclin said that not only him, but Chase, the defense, everyone has to get better, not settling on what they did last year because it didn’t get them where they need to go.