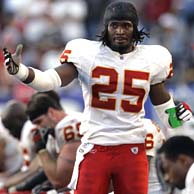 Unable to trade away defensive back Greg Wesley, the Kansas City Chiefs released the veteran safety who was a starter for seven seasons prior to the 2007 season.

Jarrod Page and Bernard Pollard replace Wesley in the starting lineup last season and after the Chiefs drafted DaJuan Morgan from North Carolina State in the third round, it was apparent the Chiefs were heading in a different direction.

Wesley had requested a release, but the Chiefs were hoping they could get some in return by pulling off a trade with another team.  When that didn’t happen, the Chiefs had no other choice than to cut ties with Wesley.  Look for the veteran to land with some team with training camps starting in a week.