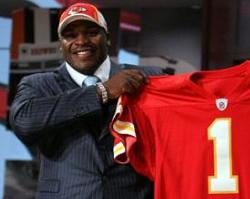 The Chiefs agreed to three-year contracts with wide receiver Kevin Robinson of Utah State and defensive end Brian Johnston of Gardner-Webb.  Robinson was a sixth round pick, Johnston a seventh round selection.