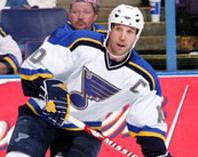 Drake played six seasons with the Blues from 2000 to 2007.  The Blues bought out the contract of Drake after the 2006-2007 season, opening the door for Drake to sign on with Detroit.

The 39 year old Drake was originally signed by Detroit and was the Blues captain in 2005.