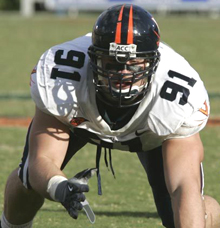 The St. Louis Rams expect to sign first round draft pick Chris Long soon and do not expect him to miss the start of training camp which begins July 25 th in Mequon Wisconsin.

Rams owner Chip Rosenbloom announced again that the team is not up for sale, but that they did hire a firm out of Baltimore that handles those types of transactions, but only as Rosenbloom insists, to handle all of the inquiries that have come in.

Rosenbloom said it’s not his desire to sell the team, but he did say that he would never say never, and that’s been his line from the beginning since taking over for his mother, Georgia Frontiere.

He’s basically saying he’s not a seller, but the door is open.